There is deep overlap between ADHD (Attention-Deficit Hyperactivity Disorder) and addiction. People with ADHD are more than five times likelier to struggle with addiction. 20-40% of adults with ADHD have a history of substance abuse.

ADHD is among the biggest risk factors for addiction. 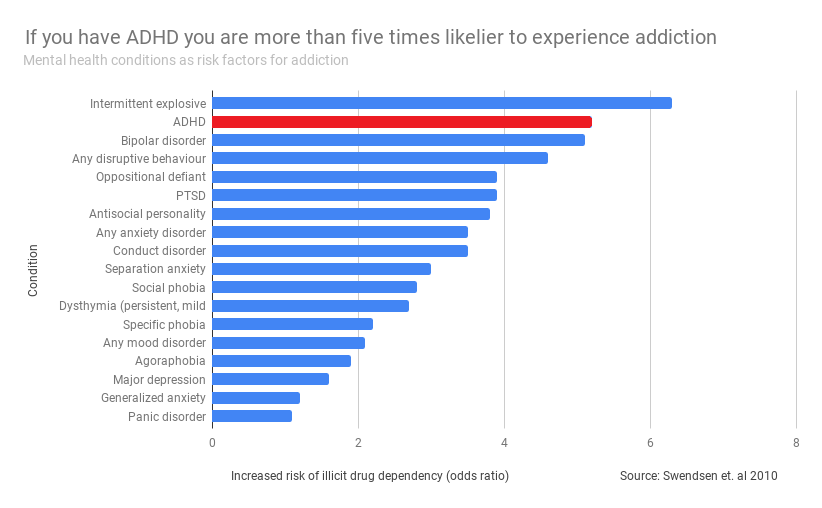 Finding strategies to regulate ADHD can be important in maintaining long-term sobriety. And this condition need not be a burden. To the contrary, when properly regulated, it entails an abundance of assets that can be fruitfully tapped.

ADHD is a mental health condition present in both children and adults.

Symptoms of ADHD include:

Why do ADHD and addiction so commonly co-occur?

Substance abuse may be a conscious or unconscious attempt to self-medicate for ADHD. Drugs may initially serve to mitigate some of the symptoms, such as restlessness. Certain symptoms, such as impulsiveness and sensation-seeking, leave people more vulnerable to addiction.

Some of the consequences of neglected ADHD, such as underachievement, may lead to frustration and disappointment, which also create fertile conditions for substance abuse.

There is overlap between the neural-circuitry  tapped by addiction and that affected by ADHD; primarily the dopamine reward circuits.

ADHD can be a risk to recovery

Once you get clean, it’s important to regulate other conditions that could lead you back to drugs. If left unattended , some of the symptoms of ADHD could pose a threat to your recovery. Restlessness, impulsivity and low frustration tolerance pose particular challenges in the early days of recovery.

The potential benefits of ADHD

When channeled with the right support, ADHD can be an asset. Many of the so-called symptoms can actually be harnessed into special qualities. Distractibility morphs into curiosity, impulsiveness becomes creativity, and hyperactivity means abundant energy.

Many trailblazing entrepreneurs, creative geniuses and sportsmen have had ADHD, such as Richard Branson, Salvador Dali and Michael Phelps.

What can we do about it?

Besides medication, there are a number of behavioural strategies we can use to regulate some of the challenges presented by ADHD and to clear the way for the potential assets embedded in the condition to flourish.

Mindfulness meditation trains our ability to focus our attention. We learn to notice our mind wondering and to bring it back to the focus of the meditation when we get distracted. This helps foster greater self-awareness. When we are more aware of what is happening within, we are better able to regulate our behaviours and act in ways conducive to our goals.

Exercise stimulates the release of neurotransmitters such as dopamine in the brain. These are the same neurotransmitters deficient in ADHD. Exercise helps improve concentration, focus and executive function. It also helps work off some of the hyperactive energy often associated with ADHD, steadying energy levels and fostering a sense of calm.

Even 30 minutes of gentle exercise four times a week can make a substantial difference.

Social media taps the same dopamine reward circuits as substances, and as such can mimic their potentially compulsive and addictive nature. Turning off instant notifications can help avoid aggravating ADHD symptoms.

ADHD or addiction alone can be a recipe for chaos. When you combine the two the scope for chaos is even greater.

Building a strong routine and maintaining it with discipline can neutralise this chaos and create a solid platform that allows you to thrive. Once you nail the basics and stick to them for a while, they start to become habits. This frees up mental space and energy for creativity to flourish. A strong and steady routine means that, rather than being controlled by the potential blocks of ADHD, you nurture the assets of the condition.

If you found this post useful, you can help us by sharing it online.

Ultimately, at it’s core, counselling and psychotherapy is about the relationship between the counsellor and the client. I’ve never found the therapy itself to be a struggle or our ability to develop a therapeutic relationship any more challenging than in the face to face environment.

Unfortunately, due to travel restrictions put in place in response to Coronavirus, our clients are unable to get to us. It is for this reason that we have put together Hope Rehab Online Services to keep you safe and committed until things get back to normal.

Drugs such as opiates play an important role in the management of chronic pain, but there is always the potential for addiction and other undesirable consequences. This is why non-pharmaceutical approaches to pain management can be the preferred option for those of us with a history of drug dependence.

It is OK Not To Be OK

In this episode of the podcast, Sophie shares her ideas about why it is OK not to be OK. Those recovering from an addiction can sometimes feel uncomfortable about admitting that life has become a bit of a struggle - this may be because they don't want to appear negative or incapable. The danger with this is that pretending that things are fine  can mean not getting the support that is needed to deal with the situation.

Without Imagination There is No Hope

Without Imagination There is No Hope by Paul Garrigan  The Link Between Addiction and Impoverished Imagination The nastiest trick that addiction plays [...]

Avoid These Thinking Traps to Stay Happy, Clean, and Sober

Avoid These Thinking Traps to Stay Happy, Clean, and Sober by Joel Lewin In CBT we say it's not outside [...]